Helen Nianias in Cox’s Bazar :: Having fled persecution in Myanmar, a growing number of women are at risk of harassment and attack in 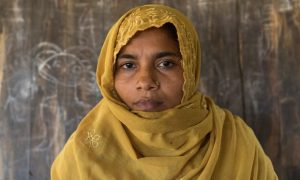 Bangladesh after being deserted by their husbands

Sara Khatun is deeply cynical about marriage. One of many Rohingya women trying to cope alone in the refugee camps of Bangladesh, she was left by her husband and has five children to look after.

Sitting in the bamboo porch of a meeting place, out of the monsoon rains, she relates the serious problems that men cause in the Cox’s Bazar camps. “If I was unmarried I would never get married,” she says.

On top of the trauma caused by gang rapes in Myanmar, and pressure for girls to get married at a young age, a new issue is emerging for women in the camps: abandonment. Those working there report a rising number of husbands simply leaving – either to slip off into the black economy of Bangladesh beyond the Rohingya settlements, or with other women.

The ramshackle and chaotic camps are already beset by violence. Men routinely beat their wives and girls are now forbidden to leave their sweltering huts unless in full burqa, in the hope that it will make them less likely targets for rape.

The problems associated with abandonment are so common, with such grave ramifications, that it is classified as gender-based violence.

Women who do not have husbands are at greater risk of harassment and attack, and have to undertake – single-handedly – a huge number of arduous tasks to help their often large families survive. These include cooking, collecting water, monsoon-proofing their huts, fixing roofs, breastfeeding, chopping and carrying firewood, and collecting rations.

Since most marriages that end with men abandoning their wives are undocumented, no statistics are available. Girls are expected to marry early – sometimes as young as 12 – after which they leave the family home. And if their husband leaves them, it’s even harder for them to look after themselves and their children. Some aid workers say they have heard of cases where one man has married as many as six women in the camp.

At another women’s centre, a ledger records why women are seeing counsellors. The acronym “GBV” – gender-based violence – crops up frequently.

“Polygamy counts as GBV,” a worker explains. “Lots of men are leaving their wives for other women in the camp. In Myanmar, they would have been punished by law – perhaps they would be given a fine.”

There is no punishment here, however, and Taslia Akter, a counsellor from one of the women-friendly spaces run by Care International, says the problem is growing. “A good number of women visiting the women-friendly space have shared that the instances of men abandoning their wives and children for a second marriage have gone up,” she says.

“Unlike in the camps, back in Myanmar one had to go through strict legal procedures prior to getting married, such as submitting forms at the marriage registration office for approval. The situation is slightly different here.”

Women who have been abandoned often blame their own “bad luck”, and some become depressed.

*Rohima, 20, is adjusting to life since her husband absconded. “We got married in the camp but my husband went off with another woman,” she says.

Sitting on the floor of her friend’s hut amid a group of women, she lifts her hand to her swollen stomach. “She will give birth in two weeks,” says her friend, Mariam.

“I can’t do anything,” Rohima says. “A few weeks ago, I managed to borrow a telephone and called him. He said: ‘Who are you? I don’t know you’ – and hung up the phone.”

Her husband is one of the small number of refugees who have managed to escape the camp and find work outside. He now lives in Chittagong, about 85 miles away, with his new wife.

Mariam explains that none of the group of five women have husbands, and that they all support each other. Most of the men were killed in Myanmar, apart from Rohima’s husband.“We have a good bond – these friends are more than my sisters.

“We are from different villages, but we are neighbours here. We are worried about the monsoon rains, it’s very difficult to live in this weather. We do not have enough wood even to cook food. We are all helpless, but we will try to help by talking and sharing our stories with each other.”

Khatun, 45, is part of a community group, coordinated by the organisation ActionAid, that visits troubled households in the camps. “Yesterday I saw a woman who had been beaten so badly by her husband that her eye was swollen. I told her: ‘If you are not in control of this problem you can come to the women-friendly space.’ She replied: ‘I’m not able to go outside because he will beat me more.’”

“She also said: ‘My husband wants to get married to another woman, and when I told him not to, he beat me.’

“Sometimes I feel surprised by how common it is, but I have to work to help manage it. Some people listen to me very well, but some are very dangerous.”

Back on the baking hot bamboo porch, Khatun says: “Sometimes when I see women whose husbands are about to leave them, I say: ‘If he is able to get married to another woman, you can live happily.’

“I feel sad, but I don’t want other people to feel sad. I want peace for women.” 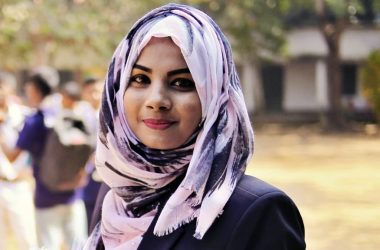 Punishing Rahi Khushi, a Rohingya girl, and our savagery